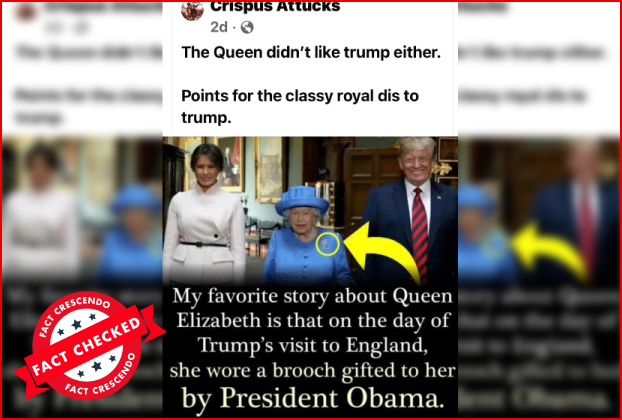 The brooch in the viral image is not a gift by Barack Obama to Queen Elizabeth II.

Many pictures and videos have gone viral on social media since Queen Elizabeth II’s demise, and the brooch is said to be the most expensive piece of jewellery the queen owned. The brooches worn by Queen Elizabeth are legendary. The head of the British monarchy never steps out in public without one, and she had a vast collection.

The caption of the post states, “My favorite story about Queen Elizabeth is that on the day of Trump’s visit to England, she wore a brooch gifted to her by President Barack Obama.”

We began our investigation with a reverse image search on Google, which led us to the image’s details. On 13 July 2018, Queen Elizabeth II hosted the Trumps at Windsor Castle during their visit to the United Kingdom. The brooch worn by the queen in that image is known as the palm leaf brooch. It was passed down from the queen’s mother and was not a gift from former President Barack Obama. Below you can see an image of the palm leaf brooch that Queen Elizabeth II was wearing during her meet with Donald Trump.

According to Politico when the Obamas went to England in 2011 to pay a visit to Queen Elizabeth, they gave her a vintage American-made brooch from 1950 — with 14-karat yellow gold, diamonds and moss agate from Tiny Jewel Box’s substantial vintage jewelry collection. You can clearly see that there is difference in the look of the brooch the Queen wore during her meet with Donald Trump and the brooch Barack Obama gifted the Queen.

Fact Crescendo found the claim made along with the viral image to be False. We found that the queen was not wearing the Obama-gifted brooch in the viral image. However, the photograph was taken when the Queen Elizabeth II hosted the Trumps at Windsor Castle during their visit to the United Kingdom.