On December 18, Prime Minister Narendra Modi visited Shillong to inaugurate and lay the foundation stones for new infrastructure projects worth Rs. 2,450 crore. In Shillong, the Prime Minister wore a traditional Khasi garment. Soon after this, social media users began circulating a picture of him donning the attire claiming that he was wearing women’s clothing. 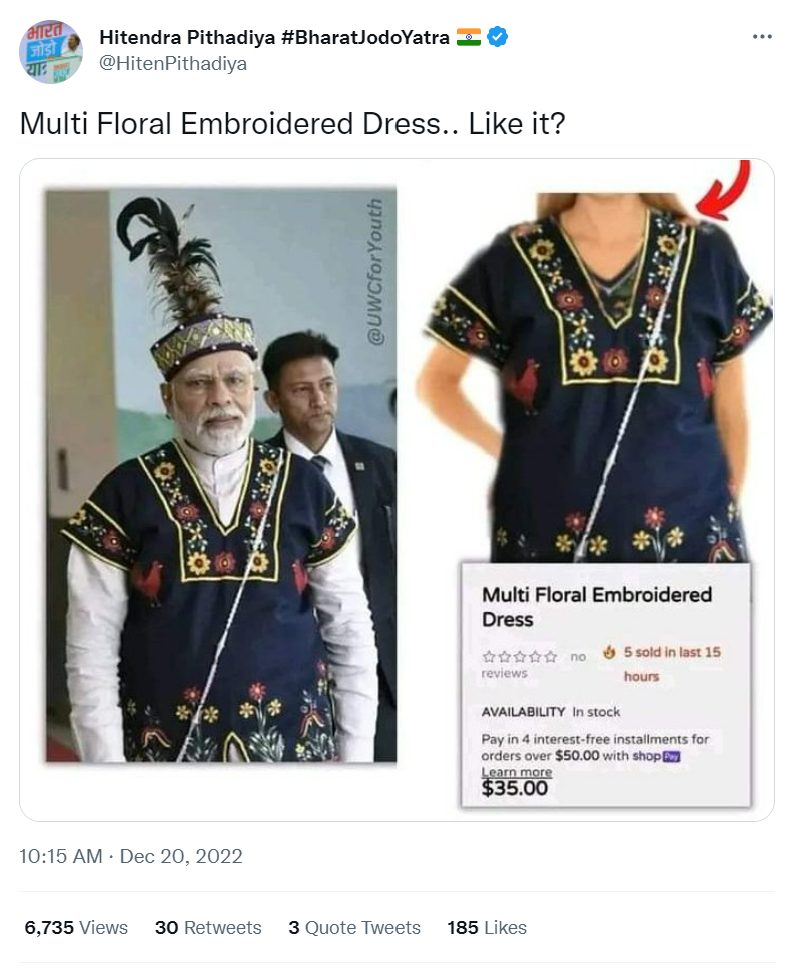 A handle by the name of United with Congress also amplified the collage. (Archived link) 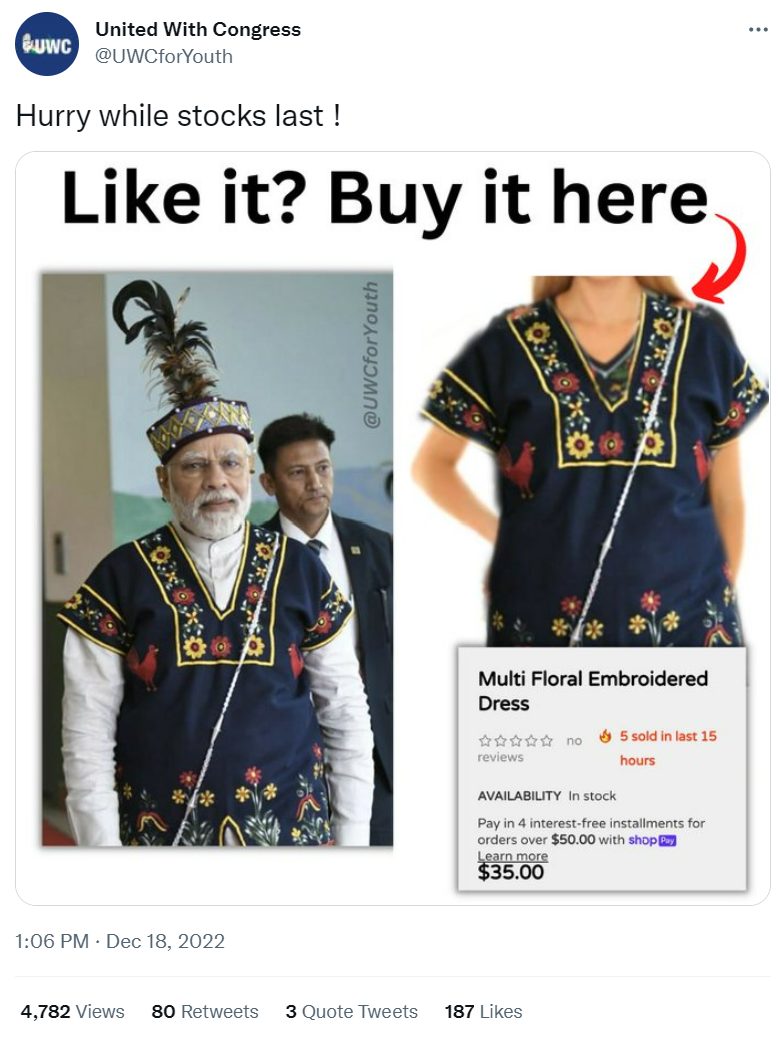 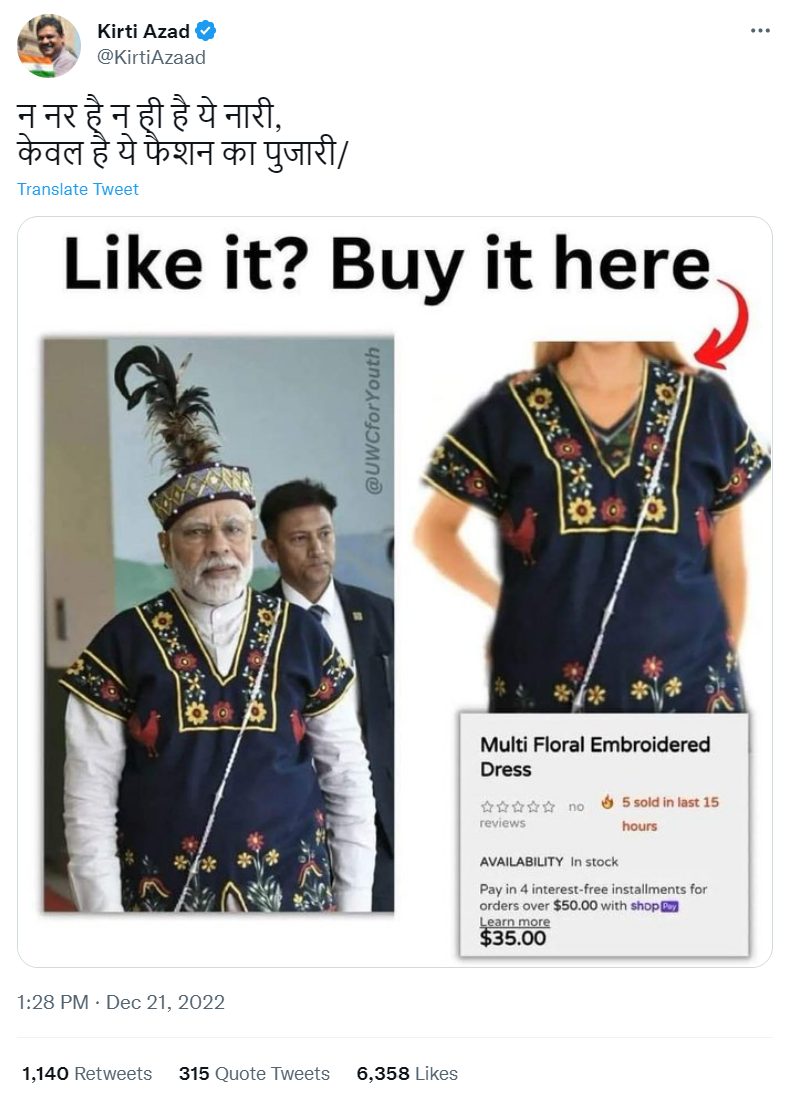 We carefully examined the picture of PM Modi and the screenshot taken from the shopping website in the viral collage. The screenshot clearly appears to be morphed as the creases and folds seen in the garment are identical in both images. In other words, the tunic worn by Narendra Modi has been cropped and placed onto the picture in the shopping portal. This can be better understood in the side-by-side comparison given below. 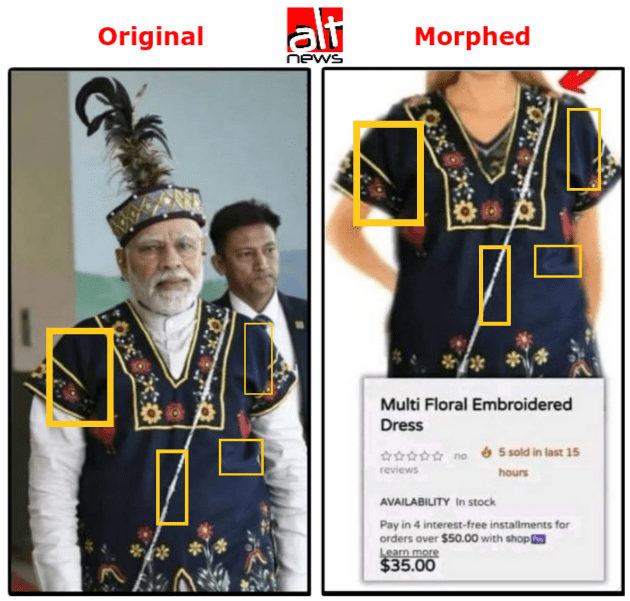 Alt News performed a keyword search using the description of the outfit in the viral screenshot. This led us to a similar product page on a website called Sheroline Wear. When we compared the picture and description on this website with the viral screenshot, we found that this was the original photo which was morphed and circulated. The Khasi garment worn by the prime minister was added to the picture of a woman taken from this website. As seen in the side-by-side comparison given below, the prices of the item on this web-page, the payment modes, and the model’s pose all match the viral screenshot.

To sum it up, several social media users, including Trinamool Congress leader Kirti Azad and Congress leader Hitendra Pithadiya, falsely circulated a morphed picture of the Khasi dress worn by Narendra Modi in Shillong, passing it off as women’s clothing.

Kirti Azad later issued a clarification and apology on Twitter.

My recent tweet was misconstrued. It hurt sentiments of the people. To them I say sorry. have immense respect & pride for our diverse cultures. I regret the hurt caused by my unintentional remark. I reiterate my pledge to work to uphold our constitutional values always

Donate to Alt News!
Independent journalism that speaks truth to power and is free of corporate and political control is possible only when people contribute towards the same. Please consider donating in support of this endeavour to fight misinformation and disinformation.

To make an instant donation, click on the “Donate Now” button above. For information regarding donation via Bank Transfer/Cheque/DD, click here.