On the sidelines of Congress leader Rahul Gandhi undertaking the ‘Bharat Jodo Yatra’ (Unite India Journey), CTR Nirmal Kumar, the head of BJP Tamil Nadu’s IT & social media unit, has shared a photo on social media claiming Rahul Gandhi was having a close conversation with a young girl during the journey.

The tweet has been widely shared here and here. In a long narrative, sharing the photo, many tried to state that Rahul Gandhi is not taking seriously the Bharat Jodo Yatra that started from Tamil Nadu’s Kanyakumari, on 7 September 2022, as he is busy applying mehndi and playing with children.

A simple check on Reverse Google Image Search showed that the photo was that of Rahul Gandhi with his niece Miraya Vadra. It was taken during the 71st birth anniversary of the former Indian Prime Minister Rajiv Gandhi, on 20 August 2015. The photo was shared by Tamil Nadu BJP’s IT cell chief CTR Nirmal Kumar along with the ‘Bharat Jodo Yatra’, which has nor relevance. 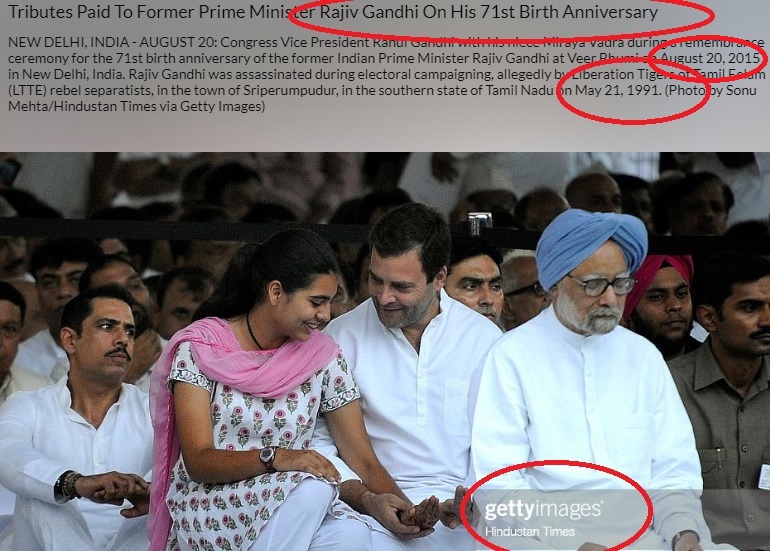 Published in the ‘Hindustan Times’, the photo’s caption read: “Congress Vice President Rahul Gandhi with his niece Miraya Vadra during a remembrance ceremony for the 71st birth anniversary of the former Indian Prime Minister Rajiv Gandhi at Veer Bhumi on August 20, 2015 in New Delhi, India. Rajiv Gandhi was assassinated during electoral campaigning, allegedly by Liberation Tigers of Tamil Eelam (LTTE) rebel separatists, in the town of Sriperumpudur, in the southern state of Tamil Nadu on May 21, 1991”.

Hence the claim was misreprepresentation.

Claim: Rahul Gandhi busy with girls ahead of Bharat Jodo Yatra.
Conclusion: Misrepresentation of an old picture of Rahul Gandhi with his niece.