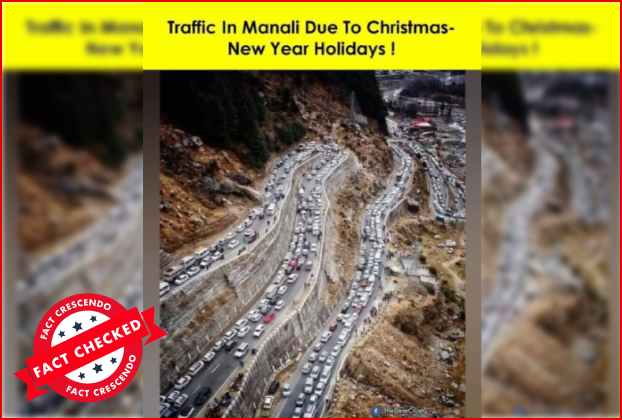 The image is old captured in January 2022. However, it is true that Manali has witnessed heavy traffic from Manali to Atal Tunnel recently.

An image showing a massive traffic on a ghat road is widely circulating on social media with the claim that it shows the recent traffic in Manali due to the upcoming Christmas and New year’s holidays.

The caption in the image states, “Traffic in Manali due to Christmas New Years Holidays!”

We started our investigations by running a reverse image search on Google whose results led us to the same image published by a Facebook user named Raid De Himalaya on 11 July. The caption of the image states ‘Manali @Yash Handa’. We can see that the original version of the image has ‘theyashhanda’ as a watermark.

Is there a massive traffic in Manali?

We found several news reports that states that heavy traffic jam has been seen on the roads of Manali. There is a traffic jam from Manali to Atal Tunnel. However, the viral image is not a recent one.

Conclusion-Fact Crescendo found the claim made along with the viral image to be misleading and shared without any context. The viral image shows the road of Manali in January 2022. The image is not a recent one. However, it is true that Manali has witnessed heavy traffic from Manali to Atal Tunnel.