Kashmiri separatist Yasin Malik, the chief of the JKLF which was banned in 2019, was arrested shortly after and in May 2022, he was convicted in cases of terror funding and was sentenced to life imprisonment. He is facing charges in a few other cases including the 1989 abduction case of Mehbooba Mufti’s sister Rubaiya. Malik alleged that his case is not being investigated properly and went on a hunger strike on July 22 inside Tihar Jail.

During the course of our research, we also found reports by many reliable media houses that revealed that Malik has been admitted in Delhi’s RML hospital after falling ill during a hunger strike in Tihar Jail. You can access the here, here and here

We started by conducting a reverse image search on Google which threw up multiple results. Some of the results indicated that the image was posted recently, however, some other results showed that this image has been available on the internet since 2018. 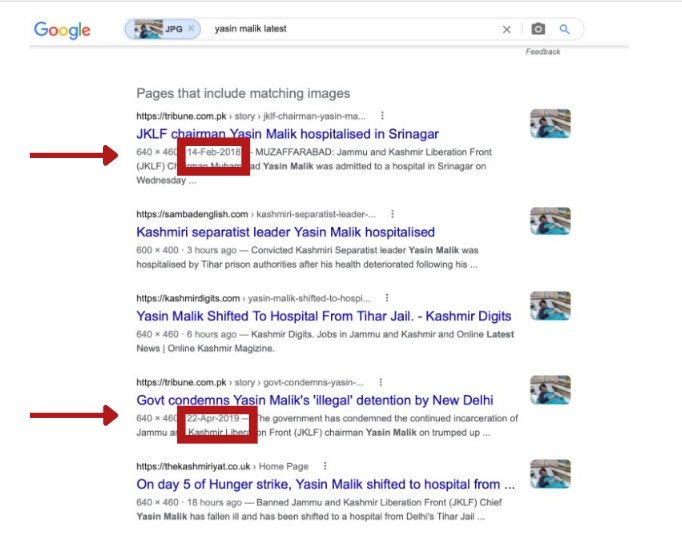 Further, we contacted Firdous Elahi, a photojournalist at the Kashmir based (INS), who confirmed that the picture was taken at the Khyber hospital Srinagar in 2018, when Malik was admitted after falling ill in police custody.

The same photograph was also shared by Yasin Malik’s wife Mushaal Malik on Twitter in February 2018. Mushaal’s account is withheld in India in response to a legal demand, but a cached version of the same tweet is available here.

In addition, we found another report by the Kashmir News Observer, dated December 3,2018 which mentions that Malik has been admitted to the Soura Medical Institute in Srinagar on account of stones in both kidneys and some other medical issues.

It appears that the same image has been recycled by multiple media organisations over the years when reporting on Yasin Malik’s health condition without mentioning that it is a file photograph which explains why the same image showed up in many different articles from 2018 on-wards. However, this image does not show his recent condition.

Thus we conclude that while the claim of Yasin Malik being admitted to the hospital is true, the image that is being widely shared as recent is old and can be traced back at least to 2018.

If you liked this and want to read more such fact checks then click here.

If you would like us to fact-check a claim, give feedback, or lodge a complaint, WhatsApp us at 9999499044 or email us at [email protected]. You can also visit the Contact Us page and fill out the form.