Fact Check: Video Of People Falling Into A Drain Is From Rajasthan, Not Tamil Nadu – Vishvas News


The video of 5 people falling into the drain has nothing to do with Chennai. This happened in Rajsthan’s Jaisalmer 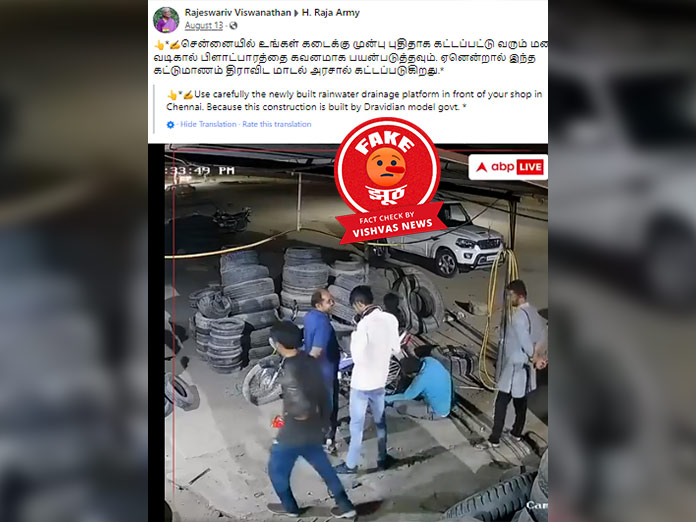 New Delhi (Vishvas News). A video is going viral on various social media platforms. The video shows five people falling into a drain as the concrete slab they are standing on collapses. According to the post, this incident happened in Chennai. Vishvas News checked the viral post and concluded that the viral video has nothing to do with Chennai. This incident happened in April 2022 in Rajasthan.

What Is Going Viral

Facebook page H. Raja Army posted the viral video claiming that it is an incident from Chennai.

Vishvas News first searched the keyframes of this video with the help of Google reverse image to know the truth of the viral video. We found screenshots of this video in many news reports. We find this video’s screenshot in a news story published on news website indianexpress.com. This video was also embedded in the middle of the news report. According to the story “Five people fell into a drain after ground collapsed in Rajasthan’s Jaisalmer earlier this month. The moment recorded in a surveillance camera went viral on the internet, triggering a conversation about poor construction practices According to the timestamp in the footage, the incident took place on the night of April 7 at around 9.30 pm.”

We also found news stories on this incident on other news websites as well. According to all the reports, the case is from Jaisalmer in Rajasthan and the incident happened in April 2022.

We contacted Narendra Sharma, the bureau chief of Dainik Jagran in Rajasthan in this regard. He confirmed that “the video is from Jaisalmer”.

Vishvas News, at the end of the investigation, scanned the profile of the user who made the Jaisalmer video viral in the name of Chennai. In the social scanning of Facebook user, we found the page has over 20000 followers.

The video of 5 people falling into the drain has nothing to do with Chennai. This happened in Rajsthan’s Jaisalmer

Know the truth! If you have any doubts about any information or a rumor, do let us know!

Knowing the truth is your right. If you feel any information is doubtful and it can impact the society or nation, send it to us by any of the sources mentioned below.

Fact-checking journalism, which holds mirror to power while being free from the ropes of corporate and politics, is possible only with support from public. Help us in our fight against fake news.