Ahead of Presidential elections with Droupadi Murmu set to win, a tweet purportedly from India’s
newly-elected president declaring that she will turn India into a “Hindu nation” and take back
part of Kashmir under Pakistan’s control started being shared on July 20, 2022 widely.

Though it was a parody account as seen, many have fallen for it to be true and reacted on Twitter. 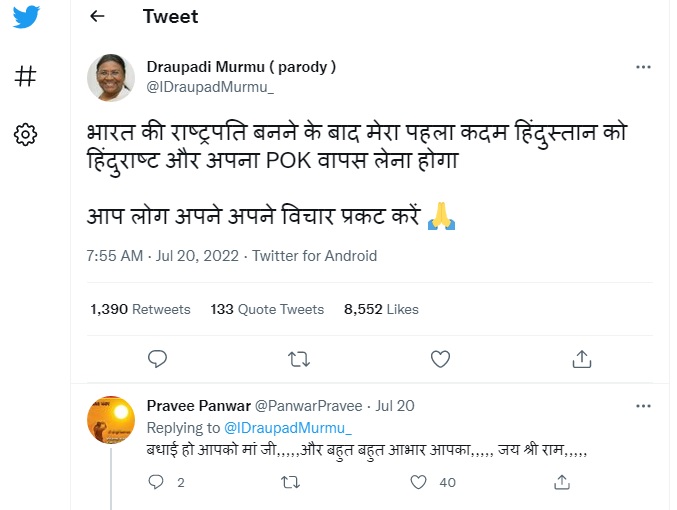 The account bearing Droupadi Murmu’s name, claimed:”After becoming the President of India, my
first step would be be to turn the country into a Hindu nation and get back our POK (Pakistan-occupied Kashmir),” said the tweet in Hindi. It won support among many who believed that it was from Murmu.

It may be noted that Droupadi Murmu was sworn in as India’s president on July 25, making her the
first person from one of the country’s tribal communities.

After simple check, it was found that the original tweet was not from Droupadi Murmu but actually shared from a parody account of @IDraupadMurmu_ and the account shows the word “parody” clearly. Moreover, it was misspelt as “President condidate” instead of “candidate.”

Soon, the official handle for India’s Press Information Bureau for factchecks tweeted confirming that it was a “fake account” in Murmu’s name. It gave out the official account of President of India as @rashtrapatibhvn.

▶️The official account of the President of India is @rashtrapatibhvn

“Droupadi Murmu does not have any official Twitter account in her name,” the PIB clarified further. Hence, the claim is false.

Claim: After becoming the President of India, my first step would be be to turn the country into a Hindu nation and get back our POK – @Droupadi Murmu_