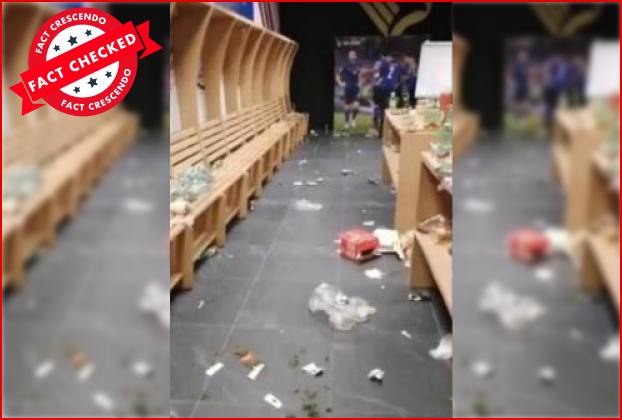 After a recent FIFA World Cup match between Japan and Costa Rica Japanese fans cleared the litter from the stands.

In the backdrop of this, a collage photo of a dirty dressing room is going viral on social media. It is claimed that Japanese players left the dressing room in a nasty condition after their defeat to Costa Rica in FIFA World Cup 2022.

However, Fact Crescendo found the claim to be false. This is an old image and not related to Japan.

Sharing the image, social media users are claiming that the visual of a dirty dressing room belongs to Japan after their match with Costa Rica.

This same claim is widely viral on social media

A Google Reverse Image Search on the viral image led us to Mirror’s website. According to the report published on 29 March 2022, this is a visual of Italy’s dressing room after their World Cup play-off match with North Macedonia in which they had to face defeat. Italy’s team captain Leonardo Bonucci apologized on behalf of the team for leaving the dressing room in such a horrifying state.

Contrary to this Italy’s communication chief Paolo Corbi had said that the team had to leave in a hurry to catch the flight and the state of the dressing room when they left was not the same as shown in the videos and images.

We came across a YouTube video uploaded 8 months ago which showed the condition of the dressing room. The caption reads Italy’s players left the dressing room in a mess after the loss to North Macedonia. In the video, from 31 seconds onwards the visuals of the viral image can be seen.

Fact Crescendo found the claim to be false. The viral image is old and has no connection with Japan’s post-FIFA World Cup match with Costa Rica. The image is of Italy’s dressing room after they lost a match to North Macedonia in March earlier this year.