The audio from 2014 showing Pakistani cricketer Ahmed Shehzad asking a Sri Lankan cricketer Tillakaratne Dilshan to embrace Islam has been digitally added to the viral video.

Amidst the unrelated images and videos shared in relation to the ongoing FIFA World Cup 2022 in Qatar, a video showing a conversation between Messi and Saudi defender Ali Al-Bulayhi is widely circulating on social media. Users claim that the video shows a leaked conversation between the players. The video shows Saudi defender Ali Al-Bulayhi asking Lionel Messi to embrace Islam if he wants to go to heaven.

Video shows Ali Al-Bulayhi approaching to Messi and saying “If you non-Muslim, and you turn Muslim, no matter whatever you do in life, straight to heaven.” Following this, the conversation is inaudible for a few seconds as Messi looks away. Again, Al-Bulayhi can be heard saying, “Be ready for the fire,” before concluding the conversation.

This video is circulating after Saudi Arabia clinched a remarkable victory over Argentina at the opening game of the FIFA World Cup 2022on 22 November.

The caption of the post states, “Leaked conversation of messi and a saudi player.”

We started our investigation by running a keyword and reverse image search on Google, whose results led us to the same video posted on Twitter on 22 November. We found that several users shared the video after Saudi Arabia took a shocking lead with two goals at the beginning of the second half of the match. However, we found that the conversation between the players was not audible. This clip makes it clear that the viral video is edited.

Where is the audio from?

We ran a keyword search on Google whose results led us to a video published by ABP News published on 14 September 2014 with the caption, “Convert and you’ll go straight to heaven: Pak cricketer makes religious pitch to Lankan player.” The audio of this video exactly matches the audio in the viral video.

The video shows Pakistani cricketer Ahmed Shehzad who was caught on camera asking Tillakaratne Dilshan, a Sri Lankan cricketer to embrace Islam. According to a news report, the players were walking back to the dressing room in Dambulla, Sri Lanka, on 30 August 2014, Ahmed Shehzad was caught on camera telling Tillakaratne Dilshan, ‘If you are a non-Muslim and you turn Muslim, no matter whatever you do in your life, straight to heaven.’

The Pakistan Cricket Board was investigating the religious comments by Pakistan opener Ahmed Shehzad to Sri Lanka player Tillakaratne Dilshan.

The PCB had set up an inquiry under the director of international cricket Zakir Khan. PCB Chief Shaharyar Khan said,“Shehzad has breached the central contract in which it is clearly written that you will not get involved in any religious spat with others, so there can be disciplinary action against him,”

The video makes it very clear that the audio from the 2014 video was digitally added to the viral video of the FIFA match in November. 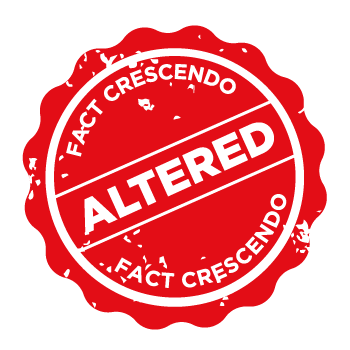 Title:Al-Bulayhi did NOT ask Messi to embrace Islam! The video is edited